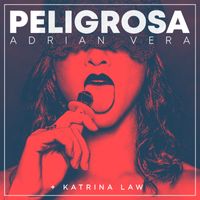 Los Angeles, CA: Latin pop artist, Adrian Vera, is set to release his new single “PELIGROSA" later this month. His new song represents the act of succumbing to the power of a woman and being completely enchanted by her.

“We wanted to bring you a track that would leave you with no other choice but to move and I think we accomplished that," said Adrian.

To round out the song's salute to the adoration for a woman’s tenacity, he joined forces with Katrina Law, best known for her roles on the Starz hit series Spartacus, CW’s Arrow and Hawaii Five-0. “I knew Katrina was an extremely talented actor, but I hadn’t heard her sing. Once I did, I knew I wanted to collaborate on this song with her,” he says.

"PELIGROSA" will be available April 24th everywhere you stream and download music.